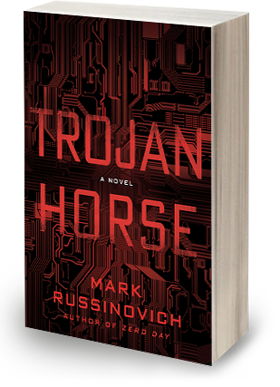 It’s been a while since I read Mark’s last book – Zero Day, and I finally got a copy of the sequel; Trojan Horse.

Like any followup action story, the main challenges for Russinovich here were to develop the main characters, introduce new characters, angles and plotlines, and also develop/increase the action.  I’m glad to report all of these were successfully undertaken, and Trojan Horse kept me as entertained as Zero Day.

In this story we see Jeff Aitken and his partner (in more ways than one), Darryl Haugen get involved in another global cyber-crisis, with even more tangled international players than before, and even more audacious technical threats employed.  Again, they find themselves getting rather closer to the action than they planned, and their simple ‘computer consultant’ existence is transformed into cyber-agent once again.

The action centres around the Iranian nuclear program, and all the interested players in its outcome.  International governments and secret agents galore, keep things moving pretty quickly, and the book is again organised in a way to make you piece together disparate events yourself to reveal the main plot.

Probably the most significant character development in the book was Darryl as she gains new strength through some traumatic events.  Jeff continues to excel from the technical side, whilst showing more reality, being rather more bumbling in other areas, like driving a manual car.

Talking of reality, it could be said that a few areas are somewhat Bond’esque in the licence they take from coincidence, good luck, and timing.  I’m a big Bond fan, so I actually don’t mind if he escapes several times in a completely implausible fashion.  I guess it all adds to the action – and again, would look great on screen.

I actually found it hard to put down as early as around half-way through, as it seemed things were slowly but significantly building to the climax from there.

The action is solid and the technical detail as always is second-to-none.  Jeff dabbles in other areas, such as Android in this story, so I do wonder quite how many languages he knows and areas of specialism he has!

As an IT guy too, I still find it hard to believe that Jeff can maintain his physique with the hours he works.  Darryl is obviously good for him 🙂

Looking forward to the next one.